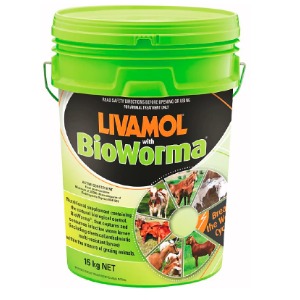 A nutritional supplement containing the natural biological control, BioWorma®, that captures and consumes infective worm larvae (including chemical resistant/anthelmintic multi-resistant larvae) within the manure of grazing animals. A breakthrough in biological control.

Livamol® with BioWorma® contain the spores of Duddingtonia flagrans, a naturally occurring fungus found in soil and pasture. Duddingtonia flagrans is a nematophagous fungus, (Greek meaning “worm-eating). It is a non-chemical biological control for the free-living stages of parasitic roundworms of goats, which acts by substantially reducing the numbers of infective worm larvae emerging from manure onto pasture. Finally, there is a commercial product that will do just that available for use in Australia.

Found on pasture (rarely soil) or in manure where it builds a microscopic net that traps, paralyses and consumes the juvenile stages (larvae) of parasitic worms and is highly host specific, only targeting parasitic nematodes.

Even though the fungus is fed to livestock, the fungus does not kill the worms in the animal, it targets the worm larvae as they emerge within the manure by capturing and consuming them, breaking the worm life cycle. Feeding the product is the means to get the fungus into the faeces.

BioWorma is not just another chemical dewormer. Chemical wormers are highly susceptible to resistance with prolonged use. BioWormer is actually a natural fungus that eats the worm larvae in their manure.

It works by adding fungal spores to their feed which goes through the goats digestive track. The journey through their digestive tract leaves BioWorma unchanged during the digestive process and when the goats manure lands on the ground the fungus eats the worm larvae as they hatch. This process disrupts the life cycle of the worm.

Because the fungus is selective it will no disrupt the balance of anything else in the environment but it should be noted that the fungus does not consume all the larvae so it’s still important to consider things like pasture rotation.

Goats will always have parasites inside their bodies. It’s only when they get out of control that your goats will get sick.  By reducing the worm load inside a goat it eliminates or reduces the need for chemical deworming.

Disclaimer: The information and products offered or suggested on this website are not intended to diagnose, treat, cure, or prevent any disease. Please make sure your veterinarian is aware of any vitamins or minerals you are giving your animals.